For all the drama surrounding the ‘once in a generation’ reform of England’s planning system heralded by the various Government announcements in 2020, the most emotive and divisive planning issue of all was conspicuously absent – Green Belt. Zack Simons, Planning Barrister and self-confessed #planorak, waded in on this point in his Financial Times article ‘We Need to Talk about England’s Green Belt’, which was shortly followed by one of his #planorak blog post stressing the importance of having a grown-up national conversation about the Green Belt and how it interacts with housing delivery in England. Last month’s Civic Voice webinar brought Zack’s thoughts on the Green Belt together with those of Catriona Riddell, an expert in strategic planning, and Crispin Truman, the CEO of CPRE the Countryside Charity. It was obviously a lively debate, with some of the comments made in the chat function illustrating how, if we as a profession cannot take the drama out of this emotive planning issue and rationally review it, how do we expect to fix the inherent problems of a system that significantly under-delivers housing?

One of the key points I took away from this dynamic and informative debate was that the Green Belt is in serious need of a re-brand. The name Green Belt brings up romantic images of England’s green and pleasant land, when in reality it is a strategic planning tool with an aim to restrict urban sprawl and encourage sustainable growth. Should the Green Belt be re-named the ‘Urban Containment Zone’, for instance, to better reflect such a purpose and technical function? I have had a personal gripe for many years with various people associating green belt with a landscape or environmental designation. Sadly the notion of Green Belt as a proxy for the countryside is not one that politicians are eager to dispel as it is a vote winner.

Yet circumstances now are such that there is a very real and pressing need to correct this fundamental misunderstanding or otherwise there is a danger we will unconsciously allow the housing crisis to deepen rather than start to dig ourselves out. As Zack highlights in a more recent #planorak post there are two things the following local authorities all have in common: York, Tonbridge and Malling, Sevenoaks, Tandridge, Chiltern and South Bucks, St Albans and Uttlesford. Firstly, they are all Green Belt authorities and, secondly, they all have local plans which recently failed or are likely to fail without going back to the drawing board. This raises questions such as, how did we get to a position where it was a binary choice between protecting Green Belt and building houses? Why are we failing to plan in the Green Belt?

So, is there a case for overhauling national green belt planning policy? In the debate Catriona argued that there is not in fact a problem with green belt policy, it is its application which is wrong; and the key issue in reality is the lack of strategic planning in England. I personally believe there is significant value in strategic or sub-national planning; particularly in relation to decision-making for the greater good: e.g. growth and infrastructure. For me strategic planning allows the difficult decisions to be made without them getting pulled into the quicksand of local politicking. The planning system seems to have become increasingly adversarial, and has seized-up in some places as a result. But housing is a necessity; so all parties, including all us professionals, need to see beyond the historic battles lines and work together so it can be delivered.

The devolution of decision-making to local people in 2011 with Localism was meant to give communities back control of the places where they live. But with local plans currently the mechanism to review green belt boundaries, a process which should be focussed place-making is reduced to intractable arguments about housing numbers and the loss of Green Belt. Added to this is the Government’s latest offering on the Standard Methodology. Catriona offered a valuable insight into this and what it might mean for England’s Green Belt with her ‘quick and dirty’ analysis. She concludes that, whilst there is merit in England’s largest urban areas doing their bit to meet housing needs, the 35% uplift being expected of the 20 largest cities/ urban areas is likely to cause even more stress around the edges with 14 out of the 20 areas identified surrounded by Green Belt. I also believe her assertion that the only real solution to such a conundrum is the introduction of a much more effective strategic planning system with a more robust approach to shared leadership and decision-making is an accurate one.

Undoubtedly the Green Belt has significant value to both people and nature, so I am not suggesting it should just be carved up for housing – far from it. I say let’s value our stunning landscapes and the countryside based on their own merits, not just because they happen to be in the Green Belt. The importance of such areas will often be protected by one if not several specific environmental designations, which also have teeth in the planning process (e.g. SSSI, LWS, AONB, etc). With the implications of climate change and COVID-19, more than ever people are realising the value of open space and public rights of way easily accessible from their own homes. As Crispin put it during the discussion, Green Belt is the ‘countryside next door’. He also raised an interesting point during the debate, and indeed potentially part of the solution, which was that if the level of affordable housing delivered in the Green Belt increased and met local need, this could minimise local opposition.

In his opinion, it was about the ‘right houses in the right places’ that was important to achieve sustainable development. I do not disagree with this sentiment; in fact in many cases sites within the Green Belt are the most sustainable for new housing in terms of creating cohesive well-connected neighbourhoods. All too often we are seeing housing development forced to ‘leap frog’ over the Green Belt and locate around smaller services centres on the outskirts of larger urban areas, which increases in-commuting (often by car) and potentially has a greater detrimental impact on the quality and character of the local landscape.

A key purpose of green belt policy is to focus development within the built-up area and encourage the re-use of derelict land. As a consequence, housing densities in those towns and sites surrounded by Green Belt are likely to increase, with even more pressure placed on the amount of public and private open space. When areas of Green Belt considered for new housing are often agricultural land, I personally feel that there are serious unintended consequence stacking up for the future if the importance of such urban green spaces are overlooked in the housing distribution debate.

A more positive engagement process for local communities in planning is welcomed, but given current circumstances, it seems that there is now too much pressure on local authorities and their constituents when it comes to new housing. Unless something fundamentally changes and an effective strategic mechanism to review the Green Belt is put into place, it seems as though we are fated to continually repeat our mistakes. Let’s stop the blame game and put in place a structure that encourages collaboration across the board and has sufficient teeth to make the tough strategic decisions so that we can at least get close to delivering those 300,000 new homes.

Planning House have a Practical Guide  to Development in the Green Belt detailing what a Council or Planning Inspector will look at when determining a planning proposal within a Green Belt. 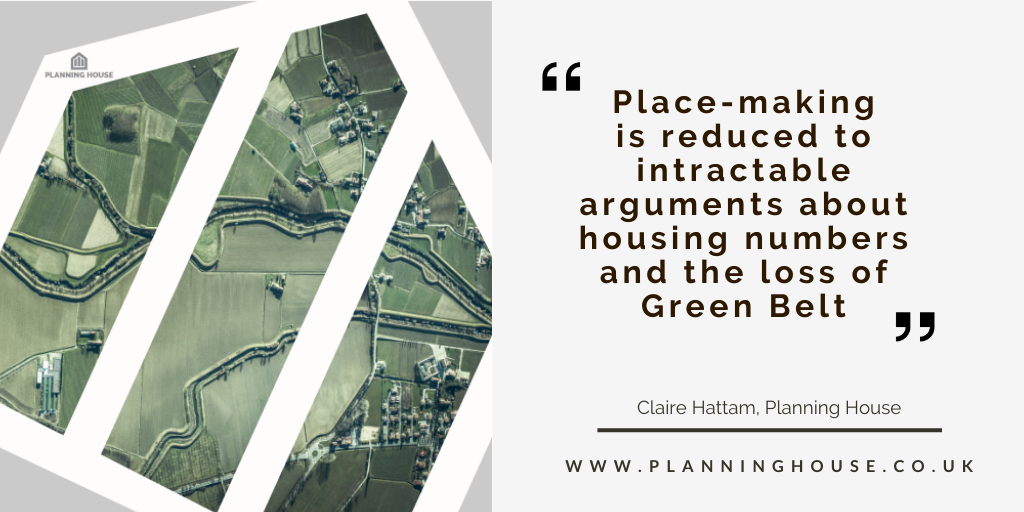