We love the tale of the Headington Shark, but if you don’t operate in the world of #townplanning, you may have never heard about it 🦈

Back in the 80s, Bill Heine wanted to “liven up his house”, so he commissioned his friend to create an eight-metre (25ft) shark which would sit on his roof, perpetually appearing as though it had just crashed into the house from the sky.

The fibreglass fish, which became known as the Headington Shark after the Oxford suburb, led Heine, a journalist and businessman, into a six-year legal battle with the local council.

Heine was initiallly denied planning permission (retrospectively of course – he didn’t apply before erecting the sculpture), but successfully appealed the councils decision to have the statue removed after support poured in from all over the country.

The planning inspector, Peter Macdonald, has gained legendary status among #townplanners when he came out in favour of keeping the sculpture.

“The council is understandably concerned about precedent here. The first concern is simple: proliferation with sharks (and heaven knows what else) crashing through roofs all over the city. This fear is exaggerated. In the five years since the shark was erected, no other examples have occurred … any system of control must make some small place for the dynamic, the unexpected, the downright quirky. I therefore recommend that the Headington Shark be allowed to remain.”

A common sense ruling – we love it! 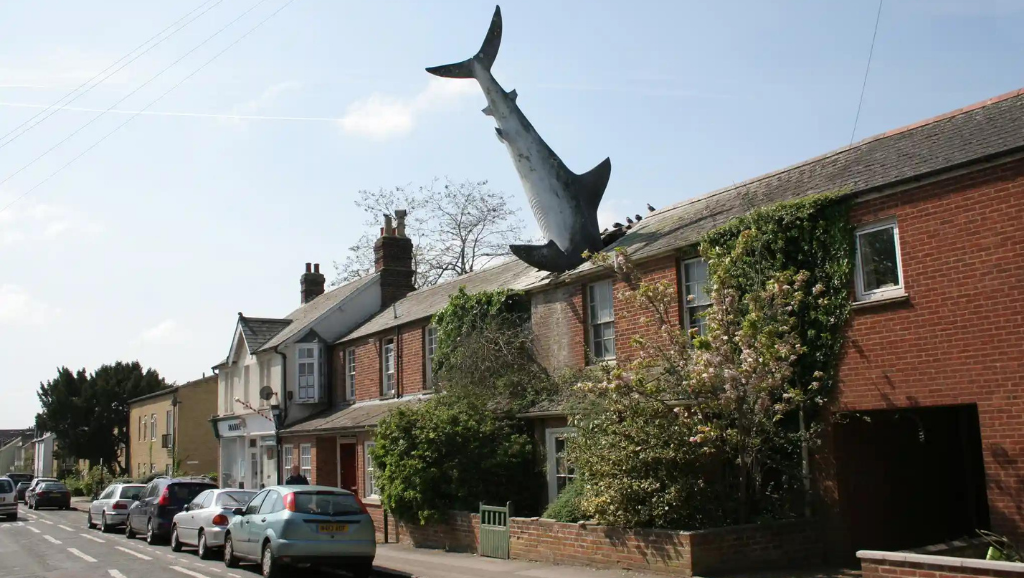 We asked other people if they knew of quirky planning stories, here are a selection:

The red and white stripe townhouse – if you’re a Sunderland football fan you’ll love this one.

Bill Heine found himself in a similar enforcement situation commissioning John Buckley (who later created the Headington Shark) to sculpt an enormous pair of ‘can can’ legs for the top of a cinema he owned – bet he got a ‘kick’ out of that! Unfortunately the cinema was demolished to make way for new development.

More recently, a row developed about the installation of Sharks in Regents Canal we think the planning team are going to need bigger boats in handling these!